4 days before I officially became an OAP, I arrived at the Hinton Skydive Centre at 8am.  Had to fill in four separate forms, and sign my name about 8 times (I was getting the impression that there were going to be no comebacks if things went wrong!)

We all went into a hangar type area for our tandem jumper’s briefing. We all had to sit on the floor, and we were shown a very large rucksack, which was our parachute, and the harness that we would be wearing.

Then we had to kneel up, with our arms crossed over our chest. This was the position that we’d exit the plane, sitting on the edge with our legs tucked right under the fuselage!

We then had to lay face down on the floor, with our head back, arms bent in front of us, and our legs tucked up and lifted off the ground. (Now, I get leg cramps from extended stretching at the gym….I am NOT supple at all, and I started to get a leg cramp, and had to straighten my leg out quickly before it locked up!) I was thinking, as I haven’t even got off the ground yet, this isn’t a very good start!

The instructor told us that there is a device in the parachute, that if he did nothing at all, at a certain level, it automatically fires something like a bullet out of the top, and releases the parachute. (I wish he’d told us this a week or so ago, as it would have stopped me waking up at 3:30am wondering if I’d be able to reach around behind me to release the chute if the instructor blacked out or died! That was at least 3 nights interrupted sleep that would have saved!)

Then there was a chat about how to land, and that was it for our instruction.

We then had to wait until our name was called over the tannoy. There were only 2/3 tandem jumpers going up with the solo jumpers each time.

After the 3rd wave, there was a long lull in anyone being called out. I was starting to get worried then, as there was a massive black cloud heading towards us, and I could just imaging it being cancelled again! Then they started calling people up again and my name was finally called!  My instructor came over, and it was the same guy who gave us the briefing, Neil.  He took me off to get fitted into my harness. Once that was on, I had to walk (waddle) back to the manifest area to wait.

Then we were off to the plane! In the plane there was a bench seat each side, running the length of the plane, that we had to straddle facing backwards. (I didn’t like to mention that I’m not good at travelling backwards!). Once in, the instructor clips our harness to theirs loosely, they closed the door (just a roller shutter), and we taxied to the end of the runway and turned round. Then we were off! I noticed that the plane was bumping and veering a bit, so was pleased when we left the runway! Then we go up in circles, gradually getting higher and higher.  About halfway up, someone said to my instructor, “You haven’t sang your song for a while, Neil”.  So he bursts into song……..”Don’t, jump off the roof Dad, you’ll make a mess in the yard, Mother’s just planted petunias…..” !!! It made the flight go a bit quicker anyway.  At 8,000ft, they tightened the harness and kept tightening them until we were at just over 12,000ft. Then the red light came on, and the door was slid open.  The wind noise was horrendous. The light changed to green, and the solo jumpers went out!

Next I am being pushed along the bench and then I’m sat in the doorway, with my legs under the plane, with the wind trying to tip me over/out! 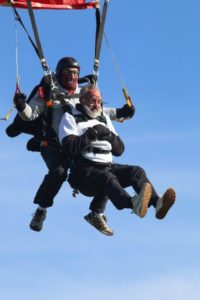 Then we fall forwards and for a few seconds are upside down. Even though pre-warned this is really unnerving! We then go into the freefall position, (well I was in what I thought was the correct position, but had to have my arms moved a couple of times, and even though I really tried to get my legs back into the arch position, they wouldn’t go back far enough, so the next thing I know is that the instructor has tucked his feet round my legs and is pulling me back into the correct position!) Any minute and I am going to get a cramp, and they would have heard the scream on the ground!

The wind is trying to pull my face off, and the noise is deafening…. But all of a sudden, I am snatched back up! I honestly thought something had gone wrong and the reserve chute had automatically gone off early or something! It took several seconds to realise that we were actually Ok and that the main chute had been deployed.

Then we are floating down. It is totally quiet, and peaceful, and I could see for miles.

Neil then asked me if I’d like to do some rotations. Yes! I said… wanting to be brave! Next we are spinning almost 90° to the angle we were originally going, three times round with G-force pulling at me and making my thigh straps from the harness very tight! We did that a couple more times, and I’m starting to think I could soon see my breakfast again! Then the last time we went the opposite way, which seemed to settle things again.

I could see friends and family by this time, and we went over their heads, and turned and came back in to land. I was told to lift my legs…then to stand, and as soon as my legs touched the ground I was tipped backwards to a sit down! (So much for my James Bond-style dignified landing, out of my harness and keep walking that I had in my mind!)

Anyway, even with the pain, finding that my legs wouldn’t bend that way, the stiff neck from the snatch, the ears that wouldn’t pop for an hour, I thoroughly enjoyed it, and wouldn’t have missed it for the world. Would I do it again? If I was younger and more supple, definitely, and if you get the opportunity to have a go, go for it!

Thank you to all that sponsored me, The Chiltern MS Centre for giving me the opportunity, and all the black humour over the past year that made me more determined to complete it.

A New CEO For The Centre