A million miles from where we started

A member of Chilterns MS Centre since 2013, Jenny tells us about the moment she was diagnosed with MS, how it changed her life, and how she learned to live a full and meaningful life again. 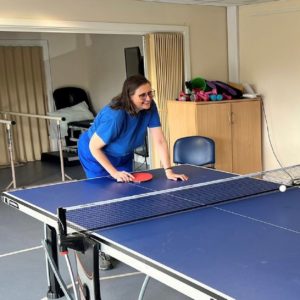 Jenny knew something wasn’t quite right with her overall health in the three years leading up to her diagnosis. In 2007 she experienced a dramatic deterioration in her vision and failed both the chart examination and the colour tests. Thankfully, over a period of several months, her vision returned to near normal and there are no current concerns about it. “At some point I realised they were looking for MS – it was just something about the questions they were asking,” she remembers. She underwent a brain scan which at the time appeared normal. However, Jenny was later summoned to a neurological clinic where the consultant gave her the “devastating” news that he thought this was, indeed, MS.

Jenny describes the journey home from that appointment as “horrific” but despite being in a state of shock, she told her husband “we go home and we get on with life.” Determination and humour are evident when she describes what bothered her most about her diagnosis, “not being able to drive a lorry or a bus,” she quips. “I have never wanted or needed to drive a lorry or a bus, but I just didn’t like the fact that something I was allowed to do was taken away from me.”

At the time of her diagnosis, life for Jenny was full and busy. Her three daughters were 11, 15 and 17, she was working as a part-time teaching assistant and was part way through an Open University Maths degree, with plans to change her career from Electronic Engineering to Maths teacher. Her MS diagnosis was life altering.

Jenny discovered the Centre in 2013. An MRI scan revealed damage to a disc in her upper back and she was advised that gentle exercise and stretching would assist in keeping the disc stable. Realising there would be additional problems for her due to her MS, she was looking for somewhere to practice yoga or Pilates that would be sympathetic to her challenges. The Centre fitted the bill and she joined an evening yoga class. Becoming aware that there was so much more on offer, she had a one-on-one assessment with one of the Centre’s physios and was encouraged to join an exercise class. Jenny has never particularly enjoyed exercise and was relieved to discover that there was more than one instructor – “I really liked the fact that the physios taking the class were on a rota, so we got a variety of approaches – some more enjoyable than others!”

In 2016, a battle with Jenny’s mental health saw her struggling to leave the house and her exercise regime was put on hold. She was diagnosed with diabetes and high cholesterol during that time and it wasn’t until 2018 that she was able to begin to rebuild her life again. After a long period of inactivity, Jenny turned to the Centre once again, making use of their online exercise videos and Zoom classes.

A face-to-face assessment by one of the Centre’s therapists, Joe, revealed Jenny had massive muscular atrophy* on both legs. The team devised a regime of physiotherapy and Pilates specifically tailored to enable Jenny to rebuild muscular strength and improve her balance.

“This is what is great about the Centre, the staff get to know you and your difficulties as well as your strengths and they are so encouraging. Joe and Matt, the Centre’s Pilates instructor, have different approaches and differing senses of humour, but for me, they both know how to lighten the mood and make the exercise enjoyable.”

With the help of the team, Jenny has been working hard to achieve the best outcome possible for her health. “It’s a partnership: try something, see how it works and what effect it has and modify it to improve the outcome. I feel truly cared for as an individual.” Jenny has also joined the book club which has been beneficial in assisting her to rebuild her life after her mental health crisis.

“If I had not found the Centre I would not have a fantastic source of support and I would be far more immobile and vulnerable to falling. I would be in a downward spiral of decline rather than experiencing a gradual improvement in my situation.”

Matt is very encouraging about Jenny’s remarkable progress, “we are a million miles from where we started!” he said. 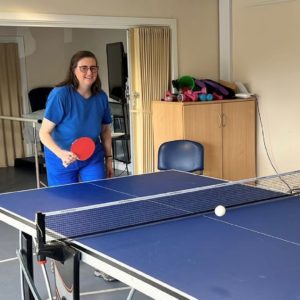 Jenny realised her ambition to become a maths teacher and currently works at a sixth-form college. Whilst she isn’t yet ready to retire, she is actively exploring what she would like to change to ensure she is well and content in the future. This includes one day having a dog, but most importantly staying well enough to be there for her girls. “My life is very much a work in progress and I don’t know how it will develop, but I know the Centre will be a big part of it.”

Jenny’s advice to anyone considering becoming a member of the Centre is “Give it a go! What you join in with might surprise you but you will meet a whole bunch of people, whether they are members, volunteers or staff, who understand what it is like to live with a challenging health condition and will do their utmost to support you to achieve what you want to achieve.”

If you would like to take part in any of the services mentioned above, please contact Amy Smissen or your normal physiotherapist who will be able to advise you on how to take part.

* Muscular atrophy is when the muscles waste away, usually through the lack of physical activity. When an illness such as MS makes it difficult to move an arm or leg, the lack of mobility can result in muscle wasting. In some cases the muscle wasting can be reversed with a proper diet, exercise, or physical therapy.

Opening up our services to stroke survivors

Clearer water but greener pool at the Centre