Why we ask you to complete an oxygen self-assessment form

Members who regularly take Oxygen treatment will be very familiar with the requirement to fill in self-assessment forms from time to time and you would be entitled to think, ‘what happens to this data and why do we never hear about it’?   A good question!

There is a lot of anecdotal ‘evidence’ that oxygen is beneficial for some people with MS and also for other unrelated conditions.  However, there is very little published scientific evidence to support the treatment, a point often made by GPs, and there are very good reasons for this.

Our self-assessment monitoring programme is not and was never intended to be a scientific study – it simply aims to monitor members receiving treatment and highlight any positive benefits which might come to light as a result.  Over the past year or so we have been monitoring all new members who have just started oxygen – to make the data meaningful we need to have a record of the person’s symptoms before starting treatment so it can be compared at various time points during the treatment programme.

Just to remind you of the self-assessment form, we ask members to score their symptoms on a scale of 1 to 10 where 10 is severe and 1 is mild or absent.  There are 12 symptoms on the form and members are asked to complete the forms before treatment and after 5,10,15,20,35 and 50 treatments.

The traditional scientific method for measuring the effectiveness of a treatment is the ‘double-blind trial’.  This is a trial in which neither the person conducting the trial nor the person receiving the ‘treatment’ knows what is being given to them i.e. it could be the treatment on trial or a ‘placebo’ with no activity.    Clearly this kind of trial is very difficult when applied to MS.  You will all be aware that no two cases of MS are identical and the symptoms shown are often varied and unpredictable. Notwithstanding the practical difficulties, it would be almost impossible to design a study with two identical groups, one of which received oxygen and the other treated with fresh air only! It would also be very unfair on members if we allocated them randomly to such a group not knowing if they would be having oxygen or air.

This dilemma was highlighted by Professor Phillip James of Dundee University when he published a review paper on the use of oxygen for MS.  He states

a 2 year study of oxygen in 128 patients was refused publication in the 1990s because editors deemed the use of comparison with historical controls inadmissible.

The following analysis of our self-assessment data collected at The Centre has been done anonymously so that no one can be identified in the programme.  The data shows considerable variation in the responses from one person to the next; however, it is possible, even allowing for the relatively small numbers and the difficulty of combining data, to see possible trends in several key parameters.

The following graph shows around 11% improvement in fatigue levels for this particular group of members. 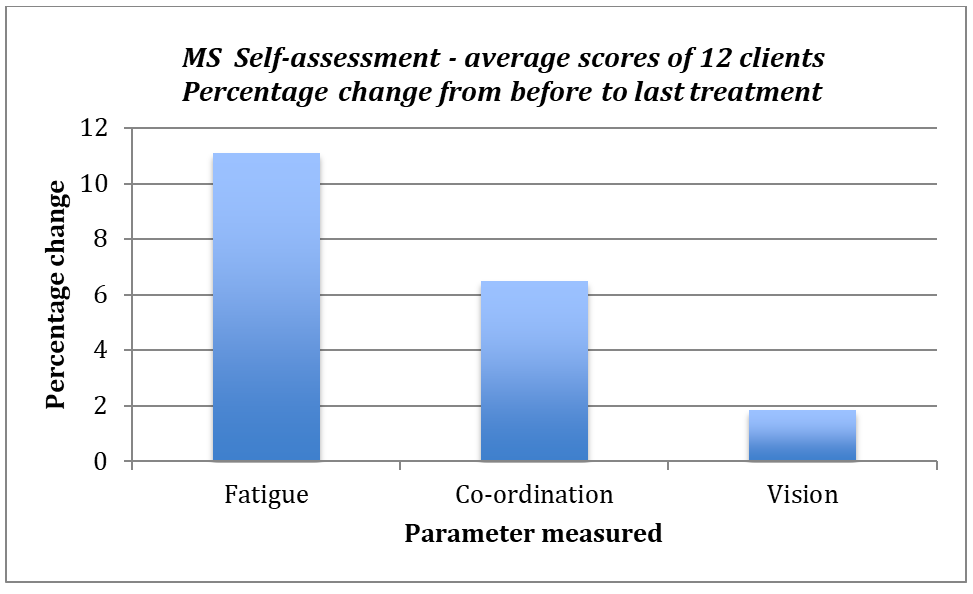 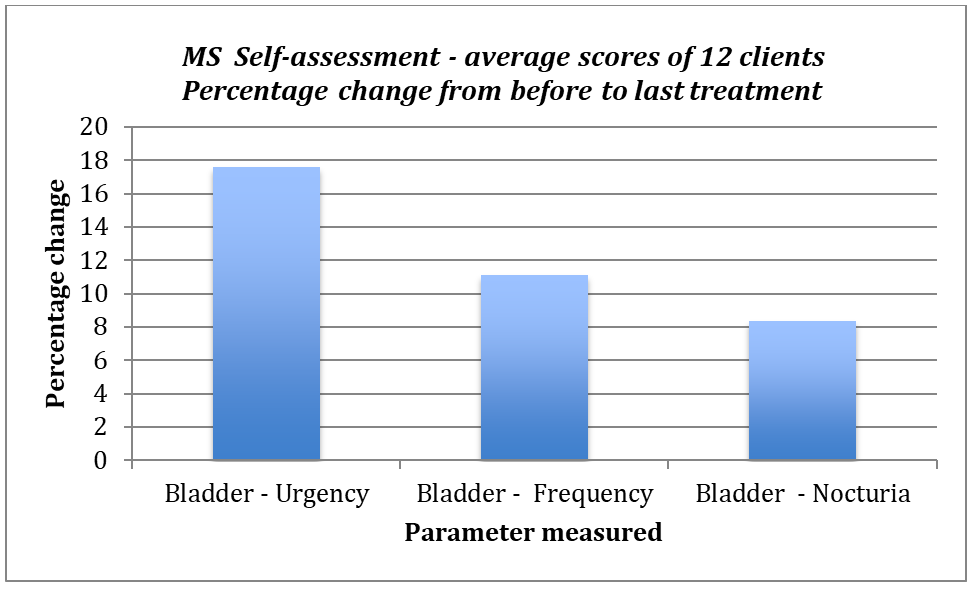 There is some suggestion in the next graph of a small improvement in numbness and concentration levels.   However, there were no changes in the remaining three parameters measured so that graph is not shown. 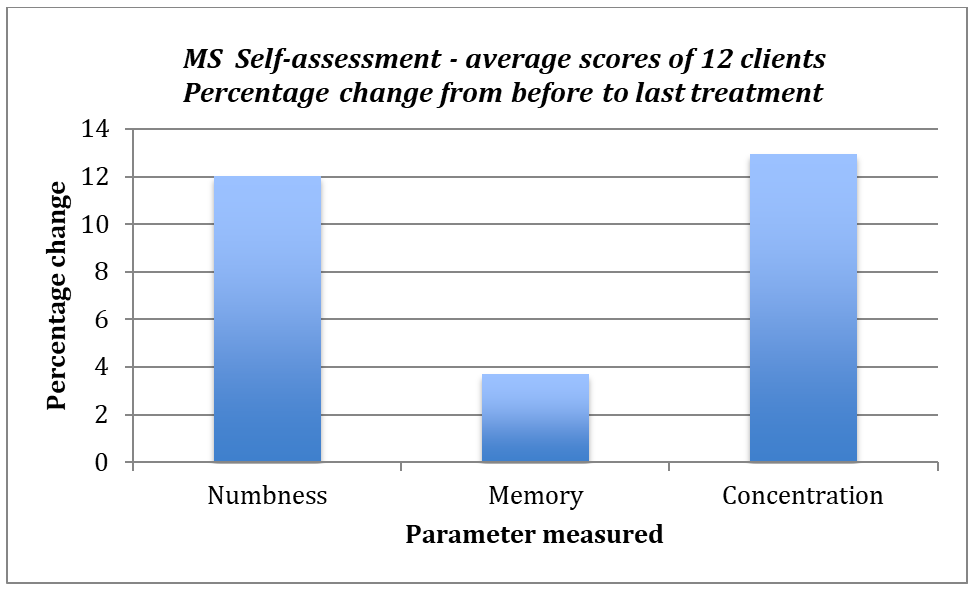 So what, if any, conclusions can we draw from this limited small study?

Professor James had these comments in his review paper:-

Oxygen treatment on a regular basis has a beneficial effect on the course of the disease.  Many chronic patients, who would be expected to deteriorate, can be stabilised

It’s also noteworthy that many members who have regular oxygen treatment at our centre often comment that, whilst the benefits of treatment might be difficult to pinpoint and define,  they certainly notice if they miss treatments when on holiday.