Jane is a very independent woman.  She loves her job in finance and going out with her friends.  But she also has MS.  Her first episode left her paralysed from the waist down. Unable to walk or do anything for herself, she was at her most vulnerable.

But once she had her diagnosis she decided to take control.  Sometimes the pain makes the little things harder to do but she just gets on a does it anyway.  This is her story.

Having the diagnosis was the best thing.  I consider myself lucky because it opened up access to medication and support, which had been unavailable to me for the previous 18 months. It was a really scary time.  But it was better to have a diagnosis than a question mark hanging over me. 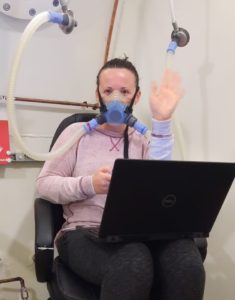 At first MS took over my life.  I felt very negative.  But now it’s a part of me I see it as a positive thing.  I’ve completely changed my life for my health.  I gave up smoking and eat much more healthily than before. I never used to exercise but now I go walking and do 3 bike rides a week.

I’m also lucky because my work is really supportive of my situation and it feels like they want me to work for them for as long as possible.  I don’t suffer with fatigue too much and I think this is because they let me take time away to have my oxygen treatment every week at the Centre.

Most people wouldn’t think twice about standing, but it’s one thing I really struggle with.  That’s been brought into focus with Covid because of having to queue to get into shops.  I find shopping a big thing.  I have to set aside time for it.  Partly because of queuing but also I struggle holding my bags.  If it’s too heavy it sets by pain off.   I took that for granted before but I can’t do it anymore.    Also if I’m in the pub I was finding it really difficult to stand up so I was conscious about finding somewhere to sit down.  But when you are sat down and everyone else is stood up you are quite out of the conversation.

I would 100% recommend someone joining the Centre.  They can offer so much.  Sadly the NHS don’t have long term care available for people with MS and the Centre fills that gap.  It’s a brilliant place to go and to be part of.  It’s reassuring to be around people who know exactly what you are going through.  It makes you feel like you’re not alone.  The MS Centre is so amazing for putting people in touch with other people.  I find hearing other people’s stories a positive influence too.  I’ve met lots of friends there.

As MS became part of my life, I found I really valued my time at the Centre.  It was time for me to speak to other people with MS.  It’s nice to get other people’s ideas about how they manage their fatigue and pain. It’s nice to have the time that is solely about MS.  In the rest of my life, I quite like that I don’t talk about my MS that much and it’s not at the forefront of my mind.  I’ve been able to get to a place where it’s part of me but doesn’t take over me.

Joining the Centre has really saved my life since I’ve been diagnosed.  I can see it would be easy to become overwhelmed, but having access to the Centre has helped me stay in control.

ULS Technology is incredibly supportive of both Jane and the Centre, choosing us as their current Charity of the Year.  They are helping to raise awareness of what we do as well as fundraise for us during these challenging times.  Find out how your company can support us too.

If you would like to help many people with MS, like Jane, to continue to do things they love and remain as independent as possible, please make a donation this MS Awareness Week.

Feeling a sense of belonging at the Chilterns MS Centre